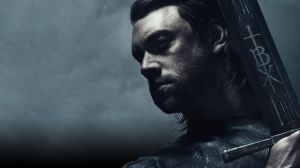 The Bastard Executioner is a blood-soaked, medieval epic that tells the story of Wilkin Brattle, a 14th century warrior, whose life is forever changed when a divine messenger beseeches him to lay down his sword and lead the life of another man: a journeyman executioner. Set in northern Wales during a time rife with rebellion and political upheaval, Wilkin must walk a tight rope between protecting his true identity while also serving a mysterious destiny.

Kurt Sutter and FX have set a cast of both familiar faces and newcomers for its period-drama pilot The Bastard Executioner.

The Bastard Executioner centers on a former warrior-knight in King Edward I's charge who is broken by the ravages of war and vows to lay down his sword. But when the violence finds him again, he's forced to pick up the bloodiest sword of all.

Newcomer Lee Jones, an Australian theater actor, will star as Wilkin Brattle, the imposing and emotionally deep yet spiritually tortured former knight in the charge of King Edward I who now lives a simple, agrarian life. Jones is repped by Emery Entertainment.

Flora Spencer-Longhurst is set as Baroness Lowry "Love" Aberffraw Ventris. As cunning as she is kind and beautiful, the character hails from a wealthy Welsh family and married Ventris at 17 to protect her family's land. Her noble duties are always in conflict with her Welsh pride. Spencer-Longhurst is represented by United Agents.

True Blood alum Stephen Moyer will co-star as Milus Corbett, a street-smart, noble and savvy character who was one of Ventris' marshals in the army. He now serves as his chamberlain, chancellor and justiciar — and friend and drinking-mate. The actor, who memorably had a role in NBC's live Sound of Music, is repped by WME.

Katey Sagal, who was Sutter's leading lady in Sons of Anarchy, will star as Annora of the Alders, a woman described as prescient, mystical and beautiful who offers predictions, cures and potions. Sagal, who also happens to be married to Sutter, is repped by WME.

Sutter, as he did in Sons of Anarchy, will also have an onscreen role; he'll play the Dark Mute, the mate and guardian of Annora (Sagal). The character rarely speaks, and no one's ever seen his face. Sutter is represented by WME.

Sam Spruell (Snow White and the Huntsman, The Hurt Locker) is set as Toran Prichard, an archer under Madog Llywelyn in the last major Welsh rebellion. He put down the bow and picked up the hoe and is Wilkin's best mate. Spruell is with ICM and Silver Lining Entertainment.

Darren Evans (Galavant) will star as Ash y Goedwig, a trapper and orphan "of the woods" who is a friend to Wilkin. Evans is repped by Troika.

Danny Sapani (Trance, Penny Dreadful) will portray Berber the Moor: a large, educated man who is a converted Muslim and farmer as well as a friend to Wilkin. Sapani is with Gordon and French.

Timothy V. Murphy (Sons of Anarchy) will play Father Ruskin, a brawny yet gentle man with a bottled fury. The character is a former soldier who left the military for the seminary. He's a priest, rector and teacher of the court. Murphy is represented by SDB Partners.

Sarah Sweeney rounds out the cast as Jessamy Maddox. Described as pretty but hardened by abuse, she's the executioner’s wife. Sweeney is with Lou Coulson Associates.

Additionally, Matthew Rhys (The Americans) has booked a guest-starring role as Gruffudd y Blaidd, the leader of the Welsh rebels, Byth Encil. The role is not expected to impact his co-starring role on FX's The Americans. Rhys is with WME and Management 360.

Sutter will write and executive produce alongside his Sons of Anarchy director/exec producer Paris Barclay, who will helm the pilot. The Fox 21, Imagine Entertainment and FX Productions drama also will be exec produced by Imagine's Brian Grazer and Francie Calfo.